BlogFeeder 2.0 is here! We’re excited to tell you about all of the new features and upgrades to an app so many of you love already.

BlogFeeder? has been entirely rebuilt from the ground up, so several improvements are coming to your Shopify blog. The BlogFeeder app now uses the same technology and structure that Shopify itself uses, which improves performance, speed, and reliability. Now that we have a better idea of how you expect BlogFeeder to work, we’ve tweaked and patched up many of its rough edges to leave behind a smooth and simple experience.

We’ve also made BlogFeeder more accurate – we’ve improved the way we import posts so that we can ensure we get all of your post information brought over to Shopify. No more random Tumblr issues or importing duplicate posts! We’ve tried to iron out all of the wrinkles we’ve seen over the past few months.

We know that some of you also had to try your initial import a couple of times if all posts weren’t brought over. We’ve taught BlogFeeder to recognize pagination so that it finds and imports all posts on the first try, not just your most recent posts.

BlogFeeder will also pay better attention to your previously imported posts. In the older versions of BlogFeeder, posts would be imported but never checked again. We’ve now ensured that BlogFeeder will regularly check out your old posts to see if they’ve been updated. If you have updated an old post, those changes will be pulled in so that your blog stays entirely synced with Shopify.

Using the app has also become far easier. You’ll feel right at home using the new BlogFeeder because you can use in the exact same way that you use the rest of your Shopify store.

Embedded in the Shopify Admin!

You no longer need to log into the BlogFeeder site to add feeds – log into your Shopify store and use the app directly in your Shopify dashboard. We’ve embedded the app in Shopify to provide a better, faster experience. This also makes it far easier for you to add new feeds, as you can do so while managing the rest of your store. 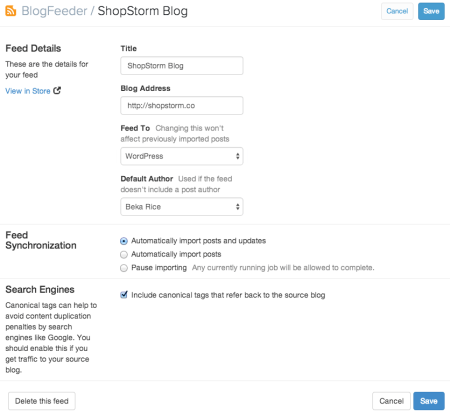 Along with the improvements in our importing methods, we’ve tweaked the way you can use imported posts. Previously, you had to use a separate Shopify blog for every feed that you imported. Not any more! BlogFeeder 2.0 can import multiple feeds into a single Shopify blog – aggregate your Tumblr photos, Pins, Facebook statuses, and WordPress blog posts all within one Shopify blog (or however many you want!).

You can also import posts into a new blog on the spot, and assign default authors or an existing author to posts if BlogFeeder can’t automatically detect who wrote it. When adding posts, this is part of a super-easy process of simply adding your URL, directing a feed to a blog, and getting started! 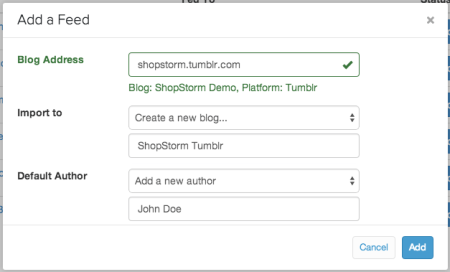 We’ve really rethought the way BlogFeeder was designed, and the feedback and contributions from our customers have been immensely valuable. Thanks so much to all of you that have given us feedback on improvements and insights into the way you’ve used our app! We’re excited for you to try out the shiny new BlogFeeder. We know you’ll love it!

Haven’t used BlogFeeder yet? Check it out now!

Content Manager at ShopStorm
Beka is our resident content crafter and service coach. She maintains our knowledge base / app documentation, helps handle customer inquiries, and works to improve our service team.